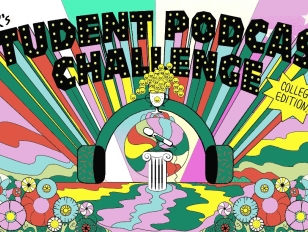 Growing up in New York City, Buffalo State College senior Bennett Cook became an expert at navigating the subway system. He also developed a deep fascination with public transportation—the mechanisms inside the trains, the way a subway system so expertly ties a city together, and recently, the music some subway trains create.

An urban and regional planning major, Cook channeled this observation into a four-minute podcast called Subway Symphony that was named a finalist in National Public Radio (NPR)’s Student Podcast Challenge.

A panel of judges from NPR and NPR-member stations selected the finalists in the initiative meant to get younger voices and stories on the airwaves. Two grand-prize winners were announced on April 6, and NPR will feature their stories on the weekday shows Morning Edition and All Things Considered.

The radio network started the podcast contest in 2019 for middle school and high school students and opened it up this year to college students. To participate, students submitted a podcast on any topic between three and eight minutes in length.

“I’d been wanting to make a podcast, and when I heard about the contest, I thought it was the perfect time,” said Cook, who transferred to Buffalo State in January from Dean College in Franklin, Massachusetts, near Boston.

Cook, who describes himself as a neurodiverse student who processes information differently, developed a strong affinity for all things transit at a very young age.

“I began by building models of trains with LEGO blocks and creating hand-drawn transit map designs,” he said. “Both evolved into graphic renderings of the world’s transit systems and digital 3D renderings of various trains.”

This affinity and talent landed him a spot at the June 2017 “Genius Transit Challenge” conference in New York City, sponsored by the Metropolitan Transportation Authority, and coverage in the New York Times.

Throughout his youth, he also rode subways in San Francisco, California; Philadelphia, Pennsylvania; Washington, D.C.; and London, England, and studied others. It was while commuting in Boston, however, that he began pondering whether subway trains make music.

“Not all, but some of them do,” he said. “It’s only during acceleration or when a fleet of trains moves at once. When you tune out other distractions and really listen, you can hear the music that they make.”

In Subway Symphony, Cook points out sounds he captured on a Boston subway train that replicate a violin. At one point, he compares a snippet to the Etta James’s song “At Last.”

“You can find music in the most unexpected places,” he said.

Cook’s podcast was one of 10 chosen as finalists. Some of the podcasts were created by two or more students. He created his alone.

Other finalists hail from institutions including Princeton University, Skidmore College, and the University of Chicago, with topics ranging from the history of grilling as a male pursuit to transgender rights in a small Midwestern town.

When Cook learned that he was a finalist, he said, “I was stunned.”

After he graduates in 2022, Cook said, he hopes to work for the Niagara Frontier Transportation Authority (NFTA). Eventually, he said, he would like to reconfigure Buffalo’s public transit operation, now a mix of light rail and subway, into a 100 percent subway system that would connect the city more efficiently and improve residents’ commutes.

He has already mapped out specific ways to realize his plan.

“During my free time,” he said, “I create transit maps and plans from scratch.”

That and, apparently, tapping into the sounds that lie underneath the swooshing of subway cars—the beautiful music that exists if you only take the time to listen.