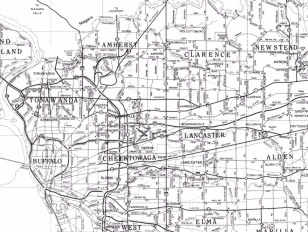 Located in the western portion of upstate New York, Erie County was formally established on April 2, 1821. Erie County was once a part of Niagara County (which was itself created from Genesee County in 1808). Its 1,227 square miles—15 percent of which is water—are populated by almost a million people, more than a quarter of whom reside in the city of Buffalo, the county seat. Erie County will celebrate its 200th anniversary throughout the next year.

Through a collaboration with the county, students in the GEG 485 Web Mapping course are using the semester to create themed story maps that will be considered for use on the county’s bicentennial website. The project is a way for students to get real-world experience and to fill a need in the community, said Wende Mix, associate professor of geography and planning, who teaches the class.

“I think it’s a good experience all the way around,” she said.

Essentially, a story map is a web-based representation of facts and data that integrates maps, legends, text, photos, and video to convey information in a visually appealing way. They’re meant to be stand-alone resources and may also include functional abilities, like swiping, pop-ups, or time-sliders.

Jason Hurley, ’18, director of community affairs for Erie County, was interested in creating digital interactive maps for the bicentennial. But with the county being enmeshed in the coronavirus pandemic, there weren’t a lot of resources available to devote to the task.

“The county is still responding to the pandemic, so everybody’s wearing many hats right now, to help with getting through our community’s needs and a response,” he said, noting that he’s been working at vaccine sites several days a week, in addition to his normal duties for the county, including planning for the bicentennial.

The offer from Mix to have students help with the maps was a “huge blessing,” Hurley said. After speaking with Mix, Hurley presented topics for students to choose from, along with a list of community experts who could provide more information. Melissa Brown, executive director of the Buffalo History Museum, also signed on to help out.

Topics for the story maps include the Buffalo Green Book, Buffalo Breweries, Arts and Cultural Institutions, Trailblazing Women, and LGBTQ History. It’s important for students to get the stories on their topics right, Hurley said.

“I thought this would be a great experience for students to work directly in a customer-client type of relationship,” he said. “They’re making sure that they’re fulfilling the client’s needs, and telling a story correctly. That is a huge part of it—getting the story right.”

In choosing the topics, Hurley said, he wanted them to be diverse, and to tell the stories of everyone in Erie County.

“We know not all history is good history,” he said. “We knew we wanted to be inclusive of all perspectives and not have the same ones that we always go through.”

For instance, the Buffalo Green Book will map out locations that Black Buffalonians and residents of Erie County felt safe going to during the 1930s and 1940s, a time of intense discrimination. The LGBTQ History map will include places where discrimination based on sexuality occurred, leading to changes for the LGBTQ community. The map outlining Trailblazing Women will tell the stories of architect Louise Blanchard Bethune, civil rights activist Mary Burnett Talbert, and Haudenosaunee leader Geraldine Green, three women whose outsize impacts on the area still resonate today.

“The term used a lot right now is ‘decolonization.’ We wanted a decolonized type of project to share the history as it is presented in a more objective way,” Hurley said.

The Buffalo Breweries map will feature locations of breweries in Buffalo and Erie County before, during, and after Prohibition. Parks in Erie County will be mapped, as will every historical society in the county.

Constructing a story map is somewhat complicated, Mix said. After an outline of the story is created, decisions need to be made on the spatial components, how many maps will be involved, and what kinds of maps will be involved. They’re meant to be interactive, and fun to use.

“The person is not just reading the story map; they also have an opportunity to interact with the maps,” she said. “Some of the story maps are actually like tours. If you click on something on the map, you get a window of information about that particular site. Or if you click through the list of sites, you’ll see where each one of those are in the map.”

Senior Nolan Dejesus, a criminal justice major with a geographic information systems minor, is creating the Erie County Passport story map, which will place all 35 of the county’s historical societies. He said he’s learned a lot about the GIS software the class is using, as well as the history of Erie County.

“There has been a lot of work and coordination between myself and my county contact,” he said. “I basically put together a massive puzzle.”

Dejesus is hoping his efforts are useful to the community.

“I hope this project is put to good use, and I hope that it is useful in general,” he said.