In the News: Vermette on Buffalo as a ‘Climate Change Refuge’

Home | In the News: Vermette on Buffalo as a ‘Climate Change Refuge’ 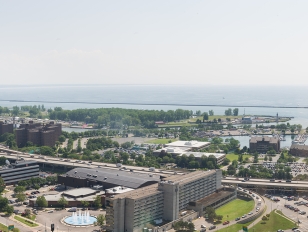 In the News: Vermette on Buffalo as a ‘Climate Change Refuge’

“How Buffalo Has Become a Climate Change Refuge” delves into why Buffalo may be considered a go-to place for those looking to escape more extreme climates in the future.

Vermette has been looking into the trends that support Buffalo's being viewed as a climate refuge since 2015. That doesn’t mean, however, that the region is immune from the impacts of climate change.

“There was no change in trending temperature between 1927 and 1964, then from 1965 to 2016, we suddenly see a rise in temperature, which one can attribute to climate,” Vermette said.

In analyzing the data, Vermette broke down the Western New York region into several categories, including how the wind and lakes Erie and Ontario affect the climate. The Southern Tier, for instance, is warming at a slower rate than the greater Niagara region. This could cause issues in the future. For example, the Great Lakes’ “fruit belt” could be in jeopardy.

And while the area will see rising temperatures going forward, they probably won’t be as extreme as in other places, Vermette said.

“Right now, we have a window of calmer conditions than other parts of the country,” he said. “Are we in a climate change refuge? Well, time will tell, but least at this point in time we seem to be playing it pretty well.”